The study "Reintegration, withdrawal and recidivism in women deprived of liberty in Chile" followed 225 women who graduated from the Women's Penitentiary Center of Santiago and the Talita Kum Study and Work Center, during their first year in prison.

The data of the first research that addresses this issue from the female gender, carried out by the Colunga Foundation, the San Carlos de Maipo Foundation and the Justice and Society Center of the UC Sociology Institute, were presented in Colunga.

In the activity they were present Esperanza Cueto, President of the Colunga Foundation; Alejandro Fernández, Chief of Reintegration of the Ministry of Justice and Human Rights; Christián Alveal, National Director of Gendarmerie of Chile, among others. 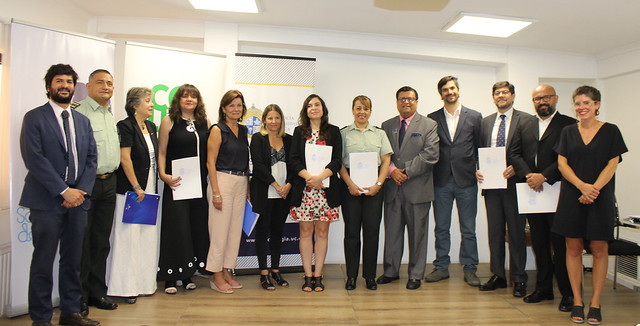 What happens to women deprived of their liberty once they get out of jail? One of the main findings of the study shows that for many women finding work corresponds to one of the greatest challenges for reintegration. Despite the fact that 83.8% of women believe that it is important to find work after leaving prison, only 36% have had one paid at least once during the year.

"Women deprived of liberty have been invisible and ignored for a long time. Understanding the obstacles that women face when leaving prison, has to help us generate better policies and programs that impact on them and their families. We firmly believe that by working together between the State, academia and civil society we can make a difference in this area and give a real opportunity for insertion, thus helping to reduce poverty and exclusion in our country, "he says. Arturo Celedón, Executive Director of the Colunga Foundation.

The study confirms that women not only bear a history of victimization and marginalization, but, once they leave prison, return to an environment lacking opportunities for social inclusion and collide with an absent State.

Another important aspect to highlight has to do with that 89% of those interviewed are mothers, of which 70% have children under 18 years of age. "The main victims are children and adolescents, not only when the mother is deprived of her freedom, but also when she is carrying out delinquent behaviors. Obviously, it is a risk factor for the development of problematic behaviors, "he says. Marcelo Sánchez, General Manager of the San Carlos de Maipo Foundation.

"The passage of women through jail has social costs that extend to their families and children. Women have been forgotten, not only in the area of intervention, but also in terms of the investigation of the factors that affect the development of their criminal careers, "explains the head of research and academics at the UC Sociology Institute ( ISUC), Pilar Larroulet.

Nearly a third (33%) of the women interviewed had started as adults in the criminal world, serving sentences for drug offenses, presenting less substance abuse and very low percentages of criminal recidivism in the year of discharge (14%).
On the other hand, a second group presented an earlier delinquent beginning, with a greater prevalence of illicit drug abuse or dependence problems (over 50%), and convictions associated with crimes against property. They also have a higher probability of reoffending and doing it early, they also have a lower probability of employment and greater residential instability.

The Minister of Justice and Human Rights, Hernán Larraín, said: "We have to understand that reintegration must follow appropriate paths to the reality of each person. It is not the same way of doing it between men and women, between young people and adults or between condemned by violent crimes or others sanctioned by economic crimes ".

Catalina Droppelmann, Director of the Justice and Society Center, maintains: "We hope that this information will serve as the basis for the development and implementation of programs that, taking care of the specific needs of this population, increase their chances of social reintegration."

After these results, the experts will work in an Advisory Committee composed of people from academia, civil society, government and justice system, which will meet 4 times in 2019 to discuss different topics and generate specific proposals that serve as input for the development of programs or strategies that allow for effective reintegration processes.