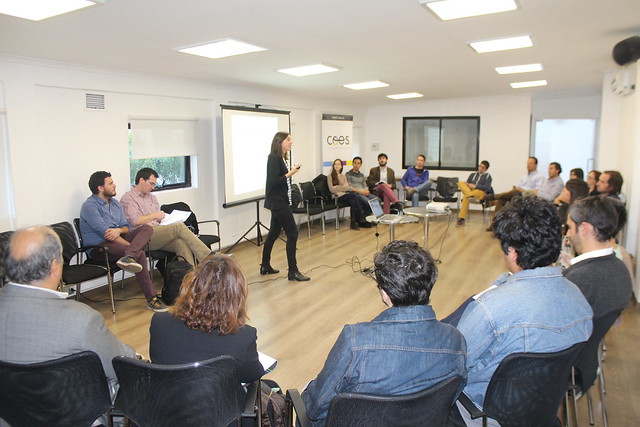 Why does the relationship between civil society and the political sphere matter? In a new meeting between the academy and civil society, convened by the Colunga Foundation together with the Center for Studies on Conflict and Social Cohesion (COES), we discussed this question.

The third talkative Colunga - Coes "Marching or voting? Citizen demands and social movements ", was moderated by Nicole Romo, Coordinator of the Public Policies Area in the Community of Solidarity Organizations, while the comments were made by Nicolás Cruz, Founder and Executive Director of Public Base.

During the day the academics of Coes Sofia Donoso Y Nicolás Somma, presented the main results of the investigation "The relationship between citizenship, public opinion and politics in Chile: What do we know and why does it matter?", which provides various data on conventional and unconventional political participation.

"We see that the identification with a political party in Chile is notoriously lower in relation to other countries in Latin America. There are multiple indicators of the discontent that we have seen in Chile in recent years, "Sofía Donoso said, noting that despite this scenario," there is a citizen demand to be able to participate more. "

While Nicolás Cruz stressed that "we can not build a democracy or a country without legitimizing, or without offering those who live in exclusion, bridges and mechanisms through which they can participate."

About the talks Colunga - Coes

The Colunga - Coes talks aim to promote dialogue between academia and civil society, seeking to generate information transfer, debate and experiences. The other topics that have been discussed were related to the Sename crisis Y  Challenges for gender equality in Chile.