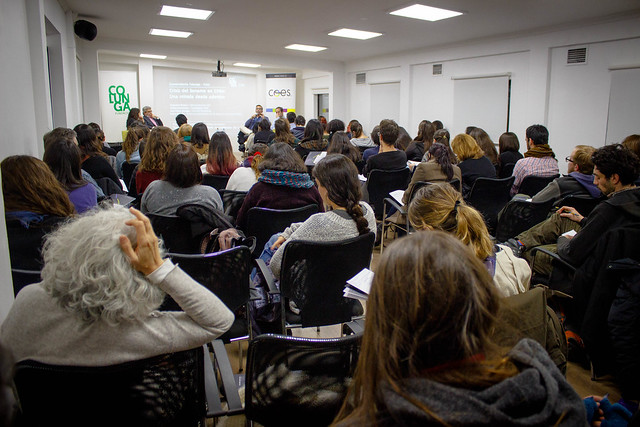 In the meeting "Crisis of the Sename in Chile: a look from within", a study was presented on the performance of the role of professionals of Sename, and had an expert panel on childhood, who talked about the current crisis of this institution and the guarantee of rights of children and adolescents in the country.

In order to promote dialogue between academia and civil society, seeking to generate information transfer, debate and experiences, the first Colunga - COES talk was held; that focused on the current crisis of the National Service for Minors (SENAME).

In the meeting "Crisis of the Sename in Chile: a look from within", made in ColungaHUB, the research of Matías Sanfuentes, academic COES was presented: "Conflicts and dilemmas of the labor role in professionals of the National Service for Minors (SENAME)". This research was carried out within the framework of a diploma program carried out by the University of Chile to SENAME officials, during the year 2016, focused on analyzing their work experiences from the dilemmas they face in the performance of their role .

The conversation panel was moderated by Alejandra Riveros, Director of Public Affairs of SOS Children's Villages, and had the participation of Juan Pablo Venegas of Project B Foundation; Carlos Briceño of the Ibero-American Center for the Rights of the Child (CIDENI); Y Matías Sanfuentes, COES Researcher.

The open discussion space between the panelists and the public focused on analyzing the main barriers of Sename, to offer a comprehensive and quality care for the care of children and youth; and how civil society organizations are able to prop up and promote real changes in the system.

Reflections of the meeting

Alejandra Riveros He highlighted the bills that are in the Senate and Chamber of Deputies, the Child Rights Guarantee, and the one that divides Sename into two institutions, one destined to generate a specialized protection system for children who have been violated in their rights; and another specialized for boys with a career in the criminal field. "It is not possible to think of a new institutionality of Sename without a universal guarantee system that protects the rights of all children," he said.

And he concluded that "it works to influence collectively, to systematize what one does as an organization of civil society. (...) This is everyone's task, the Sename is not going to solve itself only. "

While Juan Pablo Venegas, stressed that Sename crisis is not isolated, but responds to a social system with flaws. "The Sename is a border institution, it is supposed to be the last resource that we should use as a society based on all the failures we had before," he said.

Carlos Briceño He emphasized the restrictions of Sename's structure. "The productivist dynamics of Sename ends up making financing to the intervention of cases and not to its complexities, in this way the intersectoriality does not work; and on the other hand, the underlying problem is that we do not have a State that finally guarantees rights, "he said. And he stressed that Sename is governed by a law (No. 20.032)whose legal framework allows them to make few changes in its structure.

"The Sename crisis shows the possibility of starting to take charge of this, but transferring to them (officials) the possibility of being able to implement something collective is difficult. (...) In this institutional context of disintegration, it is very difficult to be able to visualize the young person and to really be able to contain him effectively ", he concluded. Matías Sanfuentes.