The risks of migration for children in Venezuela 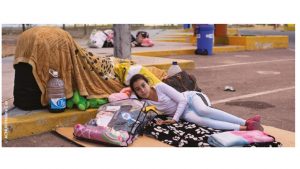 According to the UN, the Venezuelan exodus has been the largest in Latin America and one of the largest displaced groups in the world in recent history, with a migration flow of more than 4 million so far until June 2019, due to the deterioration of the situation in the country. Today 400 thousand Venezuelans live in Chile, being the largest community of foreigners.

The UN Refugee Agency (UNHCR) released a report on July 19 which reveals the risks suffered by people on the journey from Venezuela to the host countries. Most of the incidents occur during the departure from the country, but there is an increase in vulnerability among those who reach farther destinations, such as Chile, Argentina or Peru.

According to UNHCR, the majority of migrants are families with children, pregnant or nursing women (1,104) and older adults, often forced to take irregular routes and where they run the risk of being victims of traffickers, traffickers and irregular armed groups. They arrive with increasingly scarce resources and have an immediate need for documentation, protection, shelter, food and medicine.

Among the main risks indicated by the more than 7,000 Venezuelans interviewed in 2019, 50.2% of the families had at least one relative at risk due to their demographic profile or lack of resources, having had to make a decision life drastic like begging (1,094 people), sending children under 15 to work or even resorting to survival sex (146).

Without a doubt, family separation is one of the most frequent consequences of displacement. 56% of respondents said they had been separated from one or more relatives with those who lived in Venezuela. The reasons for the separation include family members who were left behind due to their physical or socioeconomic conditions, family members seeking opportunities in several countries along the route and, in some cases, due to protection incidents affecting the family unit, such as domestic and couple violence, arbitrary detention or arrest. Of them, 113 boys and girls were separated from their families or migrated without family company.

52% of the girls and boys represented in the sample did not attend school, mainly due to the fact that they had recently arrived or were in transit, but also due to the lack of documentation to enroll, limited space in public schools and the lack of financial resources to cover the costs.

Most of the governments of the region have made efforts to facilitate access to the territory, documentation and access to services, however, the capacity of the host countries has been overloaded to meet the growing needs of protection and integration, which has led to the application of stricter border controls.