In the Cecilia Arrieta School in Peñalolén 50 children and adolescents participated in the first pilot of the Children's Parliament in Chile together with Edwin Maria John, international activist for children's rights, invited by Fundación Colunga and América Solidaria.

Each brought to the shared circles, their respective experiences that live in their neighborhoods, the problems they perceive of their environment and the dreams of that Chile and that world that everyone would like to exist.

In India, Edwin Maria John has led a movement that brings together more than 200,000 girls and boys organized at the neighborhood level and federalized at different levels (locality, town, city, state, country), with political incidence. In the state of Kerala began with parliaments in neighborhoods and schools. And in Chile, it was the first time that the creation of these was planned.

How are the Children's Parliaments organized?

The children are organized into a group of maximum 30 people, who unite according to the neighborhood where they live, regardless of their age. In each of the parliaments 17 ministers and ministers are chosen, those who are linked to the 17 Sustainable Development Goals. At the national level, they have a First Minister for Children (only 13 years old and with visual impairment), who has been able to present her work even in the United Nations. One of the requests made to the Secretary General of the UN is to create a Children's Parliament worldwide.

The success of the parliaments is due to the fact that in the school they have one hour a week to solve their problems, once a week they meet with other neighborhoods and once a week the ministers meet.

In the School Cecilia Arrieta de Peñalolén 50 children and adolescents participated in the first pilot of the Children's Parliament in Chile. Patricia Muñoz and other representatives of the Ombudsman for Children and Mirko Salfate, Director of the National Institute of Youth (INJUV), among others, also participated in the interesting meeting.

See how the meeting was: 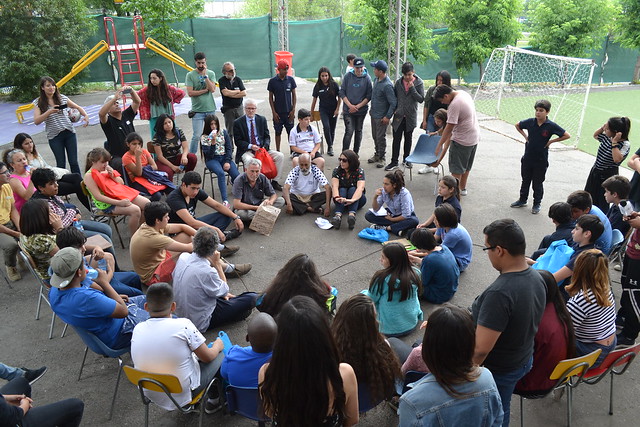