On a Friday in August 2018, a 15-year-old student sat in front of the parliament in Stockholm with a protest sign against the climate crisis, a year later, that student, Greta Thunberg, came to inspire thousands of people around the world who vibrated with the same goal: to save the planet from the pollution we have generated as humanity.

In an emotional speech, Greta, now 16, raised the voice of the children in the Climate Action Summit of the United Nations before the eyes of the world and the leaders present: “This is all wrong. I shouldn't be here, I should be at school, on the other side of the ocean. You come to us, young people, looking for hope. How dare you? They have stolen my dreams and my childhood with their empty words. But I am a lucky one. People are suffering, people are dying, ecosystems are dying, collapsing. We are at the beginning of a mass extinction and the only thing they talk about is money and fairy tales of eternal economic growth. How dare they?".

"You have stolen my childhood and yet I am one of the lucky ones. People are suffering and dying and you can only talk about money."

"If they fail us we will not forgive them," an emotional and strong speech by @GretaThunberg at the Summit of #Climatic Action pic.twitter.com/U4OxFFfWpz

But he did not remain alone in words, along with 15 young people from twelve countries, formally denounced Argentina, Brazil, France, Germany and Turkey for not protecting children from the impact of climate change. For this they used the Third Optional Protocol to the Convention on the Rights of the Child. Something unprecedented.

The movement in Chile

In Santiago and in more than 20 cities in the country, two massive marches and various activities have been carried out around the #FridayForFuture movement, which was born from the action of the Swedish teenager, where the presence of young people has been the majority.

“Fridays For Future has been a platform for many young people to take action in the future, in the face of the environmental crisis and the problems we are experiencing due to the climate crisis,” said Angela Valenzuela, spokeswoman for the movement in Santiago, to The counter. 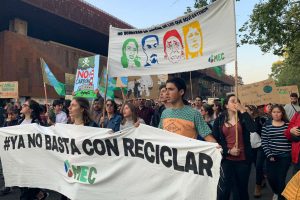 Between December 2 and 13, the United Nations Conference of the Parties on Climate Change (COP25) will be held in Santiago, where representatives from 196 countries will participate and will also be assisted by Greta.

The teenager who leads this movement, which started years ago with other voices like hers, has content that calls for action: “My message for people in Chile and Latin America is to take the climate crisis seriously, and to the young people who strike because of the weather, because that will have a huge impact. This is a global problem and we need to do this together to make a change. Keep up your great work, youth is strong. ”

😱 Message from @gretathunberg to Chile and Latin America. "The climate crisis is a global problem and we need to do this together to make a change (...) Keep up the good work, the youth is strong 💪🏼💚😭🙌🏼. # Fridaysforfuture #gretathunberg #vgivingporelfuturo #santiago #chile #globalclimatestrike # September 27 #climatic emergency

published by Fridays For Future Santiago on Thursday, September 26, 2019

Colunga is already part of the Dorapp network of social leaders!