We talked with José Andrés Murillo, Executive Director of Foundation for Trust, who gave us the lights of his work in the social organization, and told us about the development of the Observatory for Trust, the winning project of the Colunga Strengthening Fund.

What does Fundación Para la Confianza do?

We have been working, eight years ago, to work against child sexual abuse in our country. We work creating tools for prevention and in the accompaniment of victims. We serve approximately 500 people a year, who have been direct or indirect victims, family members, parents, and couples of persons who during their childhood were victims of sexual abuse. This means for us to contact the networks, derive, and in some cases we even take charge of the legal representation, in order to defend the people who have been victims.
In relation to prevention tools, we work with schools, educational communities and municipalities to validate protocols and prevention systems for child sexual abuse. We work with 10 schools, kindergartens and municipalities, empowering educational communities, that is, parents, teachers, neighbors, and children themselves, in strengthening the links and creating protective contexts . Our way of preventing abuse is based on a concept, which we have been building and developing even theoretically, which is lucid confidence. What we want is to use trust as a factor of protection, not of risk, but to be a protective factor it needs to be a lucid, alert, respectful and ethical trust, where there are concrete factors of strengthening work in the communities. And that requires an even philosophical, social, relational and practical work, so that people can count on bonds that are protective and not risky.

How was your relationship with the Colunga Foundation born?

We have the Colunga Foundation as an allied foundation, beyond the resources and competitive funds, as a foundation that is thinking from the social innovation. The fact that we are recognized for innovation in attention, in work in the thinking civil society, is an enormous value.
We decided to apply with one of the issues that has given us theoretical, ethical and practical problems: How we make the country really take charge of the special protection of the rights of children who are under the care of the State, especially Sename.
A while ago the crisis that was in Chile with the lack of protection of the children in Sename was uncovered, and the social indignation began to move the tectonic plates, but someone had to take charge, not only with indignation, not only with the march or the protest, but also with changes, with transformations that include political changes. In the end, children who are under the protection of the State do not help us to go out and protest if that does not translate into real changes. So, for that, we decided to create the Observatory for Trust. An autonomous observatory, funded by civil society, without any weight of the State, which seeks to systematize the social control of the State, from civil society, which generates tools and measures of control and link. Civil society can monitor and generate links with children and adolescents who are under the protection of the State, and in this way raise the standards of protective contexts, where children can better exercise their rights, because the The State, which is a guarantor, is observed by civil society and this requires the State to be a constant guarantor of the rights of children. That is the method of the Observatory for Trust, which is now housed in the Foundation for Trust.

What does the Observatory for Trust do?

We want to create this social control from the citizenship, but also from a kind of questioning. We want to question the State in its way of unprotecting the children and adolescents that are under its protection. When we read all the diagnoses that exist, about what happens in the residences and in Sename in general, what came up is to ask a question, we have many questions and the questions must be made explicit. Questions do not always have answers, because sometimes the answers close the real questioning, and here what we want is to ask the State how it takes care of the children under its protection, and that the response is an action, not just a theory . When the State responds with actions, it is transforming a context that has been, for a long time, already unprotective, into something protective. We want to move from a context that has violated the rights of children, where they have even died or been victims of unlawful coercion or torture, to a context that can protect them, be the guarantor of children who were, at some point, unprotected or abandoned , and that they can re-establish their rights, not only as something theoretical, but in their links with the world; that the world is presented to them as a habitable place and not only as an unprotective and vulnerary place.

Would you recommend other organizations to apply for the Colunga Strengthening Fund?

Beyond being a source of available resources that can help you develop a project, they are allies, not just "financiers". They are allies of a project in which they will be accompanying you, in which the innovation process is constant. Colunga demands and challenges you to ensure that innovation is not only in the proposal, but also in the development of the project. That has been important for us, because this need to create a new system of social control and links, between civil society and the State when unprotected children's rights, with a fund that demands and challenges you to join that control is constantly innovative. That is very powerful. In each of the failures of the State, of the social, of the political, where civil society organizations enter to generate some proposal for a solution to these failures, innovation is fundamental. We can not stay with answers of 10, 15, 50 or 100 years ago, to questions that are new. That's why for us the question of asking questions is a methodology, not only theoretical, but action.

NOTICE: The Colunga Strengthening Fund will open its applications at the end of June. We invite you to be attentive to the call. 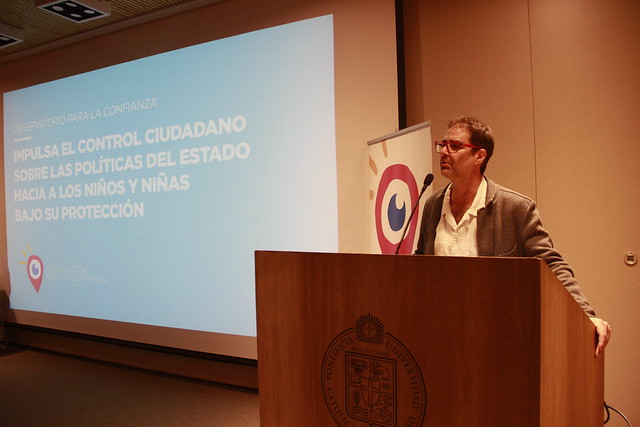