Workshops on language and reel inclusive, a panel that brought together the State, the company and civil society and an international luxury talk, were the activities carried out in Colunga Foundation this December 5, within the framework of International Festival of Social Innovation (fiiS) 2018. 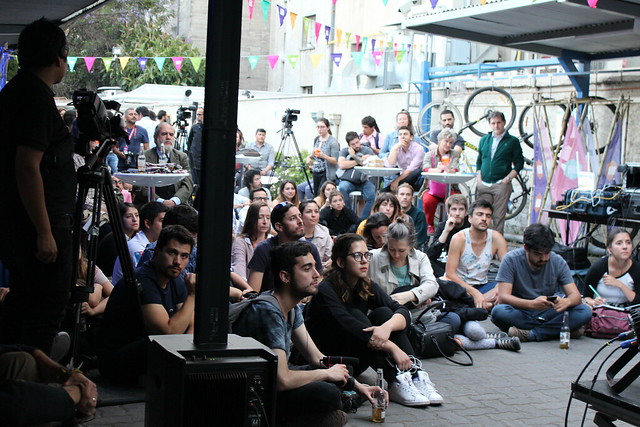 "You do not say it: inclusive gender language for the 21st century", is the name of the workshop that Jessica González, Director of the Leadership Center of CommunityWomen, dictated in this cycle of talks. An invitation to think and create other forms of expression that are more inclusive, providing tools that can be incorporated into the word and talk of day to day.

1-. Always consider the context of communication: "Whether for the creation of a graphic piece or text, the idea is to make visible those who are excluded from the discourse".
2-. The language structures us: "It builds a conception of the world and the relationships that occur, therefore, represent and build reality."
3-. Language is power: "And this is key when we want to transform speech today. Reproduces inequalities or claims rights. "
4-. What is not named does not exist"If we do not name women in the discourse they do not exist, if we fail to make visible those who do not consider themselves identified under gender binarism, they also cease to exist."
5-. Use of the generic male: "This idea has to do with the fact that the masculine has been used as a universal reference. Everything revolves around man, women are absent or are named in relation to man. "

We also had an inclusive reel workshop, along with Felipe Orellana, General Director of Plataforma Miope, who delivered tips interesting that help to relate better to people with disabilities, in any context:

–Ask people if they need help, instead of supposing it, "But without being offended if the aid is rejected."
–Do not overdo it certain ways or ways of talking to someone in a situation of disability.
-If the person uses a wheelchair or crutches, let your steps go at the same pace.
-If you are in a meeting, event or meeting and helps to keep the crutches or helps technically to a person with a disability, make sure that, for example, the crutches are close to her or that she knows where they were.
-Yes you do not know how to use the wheelchair do not move it, "all the wheelchairs are different from each other".
-If you are in a disco with someone with a wheelchair, do not use it as a coat rack.
–Never pretend that you understood what a person with cognitive disability wanted to tell you

Social Innovation 2030: The role we must assume

"From the world of entrepreneurship there is a great possibility of contributing to solve many of the problems we face today. Entrepreneurship is a tremendous tool for social mobility, "said Soledad Ovando.

Sebastián Gatica commented on the importance of giving depth to social innovation, which implies putting together the trajectories of the government, civil society, academia, to promote and accelerate them with the 2030 Agenda.

From CORFO, Victoria Paz stressed that this institution is currently linked to sustainability, because "we believe it is a transversal umbrella, you can not do economics without taking that into account." And regarding social innovation, he said that they have evolved in their traditional program, to solve problems, not only from the point of view of the market, but also from the communities.

The Sociocracy of Edwin Maria John

Edwin Maria John, is a renowned international activist for children's rights, and expert in the introduction of Sociocracy and dynamic management in civil society organizations. He is a leader of the United Nations for his work in organizing more than 100,000 "neighborhood parliaments" in South India. This movement, is one of the most important that has motivated, and today they bring together more than 200,000 children organized at the neighborhood level and federalized at different levels.

In his talk "Sociocracy: Sustainable organizations of the future", delivered the principles that govern this new way of governing, which is committed to collective intelligence and has generated profound changes in India and, perhaps in the near future, in Chile.