The sociocracy arises to listen to the opinions of all members of an organization. Edwin Maria John is the main driver of the system in India, which seeks to empower and encourage to be part of the construction of a common good.

Every group and organization uses some system of governance. Normally in families, for example, a kind of "authoritarianism" works. Parents and / or moms make decisions and over time they are mutating into a democracy (or even a new "authoritarianism", which now falls on the children, when parents get older and have a harder time making decisions). But Was not it that two heads think better than one?

Yes! And this is precisely what the sociocracy, a system of decision making in which all participate and reach consensus as a whole. We speak with the renowned international activist for children's rights, leader in the United Nations, Catholic priest and expert in sociocracy, Edwin Maria John (73), who tells us about its operation and application in the world.

Democracy is our past and present, but is it our future?

It is often said that the world is changing faster than ever, that it is necessary to adapt and that we must look for new ways of doing it . Democracy, however, the system on which our society is based, appeared in Athens in the year 500 a. c. Although in the way we know it, it happened a lot later, with the Independence of the USA and the French Revolution, in 1789.

And although many say it is the best system, others consider that it does not give us true freedom. As Benjamin Franklin, one of the founding fathers of the USA (who signed the Declaration of Independence), He said: “Democracy is two wolves and a lamb voting on what they are going to have lunch. Freedom is a well-armed lamb that disputes the vote! "

However, democracy has been changing and changing a bit over time, and it is not common to hear about new systems of governance. Maybe for the reason that He said the British politician and winner of the Nobel Prize for Literature, Winston Churchill: "Democracy is the worst form of government, with the exception of all others."

So, should we be looking for new ways to govern?

"The octopi have a great message for us, about the power of group intelligence and our way of governing", He says the writer of We the People (one of the main guides of the system), John Buck, in his TEDx on sociocracy. These animals are among the smarter of the world, they process visual and tactile information in a similar way to how humans do it. They are curious, they get bored and have great ability to learn and use tools, they even throw stones when they are angry!

And the octopuses are like a socio-political group. They have nine brains that work together for a common goal. Each brain is like an individual, explains John Buck, there are more adventurous, more timid arms, a whole set of beings that work to achieve what they need.

"The fundamental principle is equality. Everyone sits in circles, everyone who feels inspired to say something says it. No one is bigger than another and nobody is smaller than someone else, "explains Edwin Maria John, an expert in sociocracy that will be presented on December 5 in Fiis 2018 (International Festival of Social Innovation) to talk about their work in an organization of more than 100,000 "neighborhood parliaments", or Neighborhood Community Networks (NCN), in the south of India.

This is a method of governing that consists of the participation of all those who make up an organization or institution, or it could even be the governance system of an entire society, as stated by Edwin. How? The organizations are divided into small groups that together reach agreements that must be accepted by all participants. Everyone expresses their opinion equally, however, one acts as a moderator to guide the meeting.

The basic political unit of the system are these groups. Everyone can see and talk without the need for a microphone. They deliver their opinions and together they arrive at a shared proposal. If any of the group does not agree, the idea is modified or changed until there is consensus.

"Small groups are necessary for everyone to think. So that all participate and every opinion is heard. A) Yes, everyone is in a position of equality in terms of sharing their opinions", Emphasizes Edwin.

Consensus is the norm

This regime is not exactly new, since the term appeared in 1851, but the system developed more in 1970, by the Dutch engineer and entrepreneur, Gerard Endenburg. He created this method of management and government while running his electrical engineering corporation, Endenburg Electrotechnik, in the Netherlands. 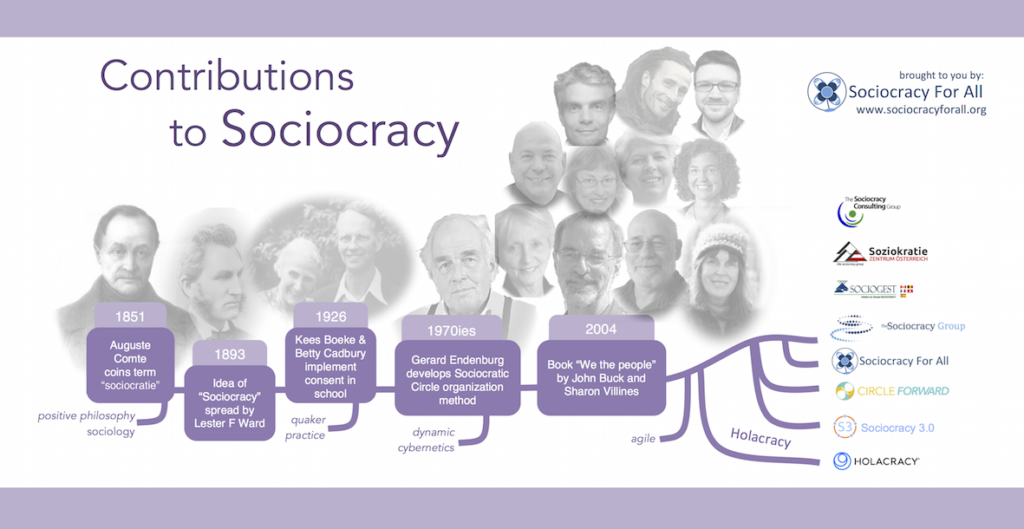 History of Sociocracy. These are the people who have contributed most to its development Source: Sociocracy for all

The model is also is known as dynamic governance(dynamic governance), because it reflects the way in which some cybernetics systems work. The idea was to create a complete feedback mechanism that would guide correct decision making and governance, just like a machine. "Unless all the parts of a machine are online, and have no objection to the other parts, the machine can not work. Consensus is fundamental"Explains Edwin.

All decisions are made only if there is consent, that is, if there is no objections, which, at the same time, are considered necessary and valuable to improve any proposed policy.

That is, this group (whichever is organized by the sociocracy), chooses representatives or moderators, who explain to other groups about the conclusions reached jointly. Some speak with others, in small nuclei, without taking the microphone, but in face-to-face talks that, after so much turning and turning over an issue (considering criticism, objections and refusals), reach an agreement. Measuring pros and cons and after a long debate, everyone finally agrees and has reached a resolution. Subsequently, the moderators of each group meet with the moderators of other groups and so on until the opinions of all are analyzed and really taken into account when governing.

Sound idyllic? Yes, and to us also at the beginning, but look how it is being applied in different places, with good results:

Edwin Maria John, besides being a Catholic priest, studied journalism in the Philippines and based on his experience and what he learned about the sociocracy, he relied on This system of organized and interconnected groups to generate changes of which all were participants.

He lived on the south coast of India, he tells us, and he always saw many conflicts that were not resolved. Thus began in the late 70s to apply this method in 17 neighborhoods (of 30 families each), and helped organize them to talk each week about their needs and proposals.

In this way, Edwin created an organization that was based on this idea, Neighborhood Community Networks (NCN), and with this initiative have formed thousands of neighborhood groups and neighborhood parliaments of children in schools or neighborhoods, women and public in general. It is believed that this movement has been an important means to promote peace and empowerment in India. In addition, the Parliament of the children of Tamilnadu-Pondicherry (India), won a prize from the UN, San Marino-UNICEF to the best organization directed by children for action for the rights of children in 2009.

Then you can read the testimony from Kingsley Asukwo Udo, a South African who helped with the organization of neighborhood parliaments:

"Politicians and leaders at the national level are not exposed to the same circumstances as us. They do not understand the problems and needs of the children. We live it. We need to solve the problems of children, for children and for children" explained one of the representatives of a community group, Paul Thomas, in 2009.

Exactly that is the reason why Edwin John considers that this form of governance is so important. It is the only one in which the voices and proposals of all can be heard in order to build "deeper and less divisive democracies in the future"", As they explain in NCN. All through these small inclusive, participatory, non-dominant, ie socio-political, neighborhood parliaments. "It is where all voice matters"Says Edwin.

And some initiatives are already appearing in Chile, since Colunga Foundation Y America Solidaria, who brought the expert, began to apply children's parliaments in country schools, as in the little school Cecilia Arrieta de Peñalolen.

The expert also considers that with this system you contribute directly to the happiness of the people. By feeling more listened to and empowered, by feeling recognized, everyone feels that they have the same value, and that their proposals are really heard. "So, it's not just numbers in a crowd."

Would an ideal society work in this way?, we asked.

" It is the only way that is possible if we want to take everyone seriously. Give everyone a voice, everyone a space for participation, if we really want to listen to them and consider their ideas to build a better world. "